New mockups of iPhone 6 published by Nikkei offers probably the closest look of the final product.

This time we have new raport from Japanese newspaper Nikkei (link for everyone who knosw Japanese language http://www.nikkei.com/article/DGXNASFK2301E_T20C14A6000000/ :). It says that the final iPhone will have the screen thinner and rounder. The display which may actually be curved so it will probably fit into the aluminium shell. The white stripes on the back of the device aren’t supposed to be antenna markers – they’re supposed to be for glass on the back panel.

In addition 128GB version of iPhone will be released too.

We will verify this information this fall. 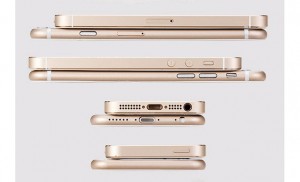